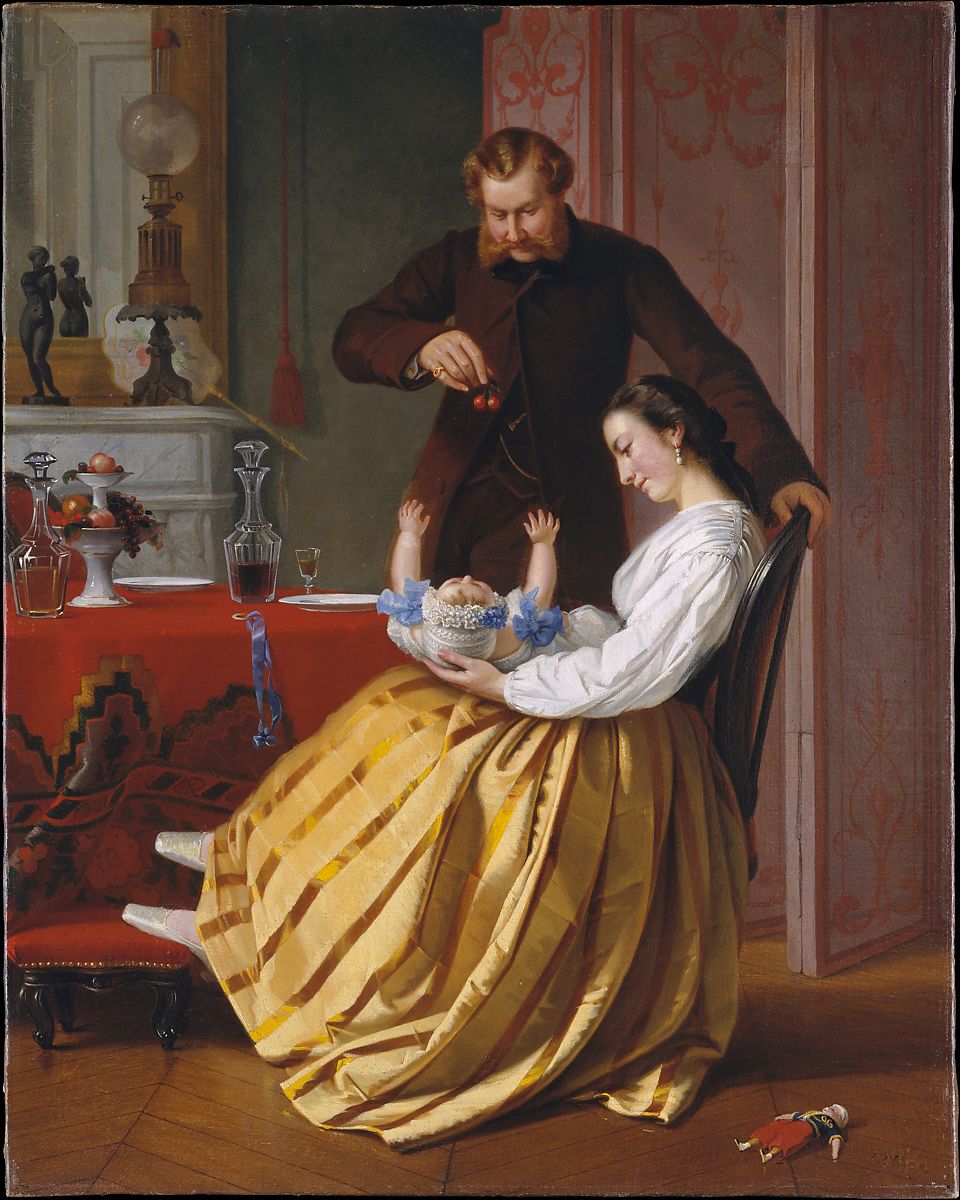 Born in 1822 in Ohio, Lilly Martin Spencer is recognised as one of America’s most important mid-century genre painters. Spencer monopolised the middle classes growing demand for prints that were used to decorate middle-class homes. Spencer played on the themes of domestic life and happy families, chosen specifically to make her work more commercially accessible. Her work has been closely linked to the American folk tradition in her rendering of exaggerated humour and sentimental nostalgia.

We Both Must Fade was painted by Spencer in 1861 and is amongst the artist’s most revered works. The image depicts a young woman in a blue silk gown adorned with pearls and intricate lace trimmings, who, standing by a table in her dressing room, holds a wilting white flower. The painting comments on the role of women in society and the importance of their beauty. Both the title and the flower are explicit references to the fleeting nature of beauty.

Although American by birth, Anna Lea Merritt, printmaker and painter of portraits, religious scenes and landscapes, spent the majority of her life working in Great Britain. A year after Merritt and her family settled in London in 1870, she met Henry Merritt, an art critic who first became her tutor, and later, her husband.

Merritt’s best-known painting, Love Locked Out, was painted in 1890 as a homage to Henry Merritt who died just three months after the pair were married in 1877. Heavily inspired by the Pre-Raphaelite painters, Love Locked Out depicts the figure of cupid standing before a locked gold door, acting as a metaphor for the mortal barrier between Merritt and her husband.

One of the most celebrated neoclassical sculptors of the nineteenth century, Harriet Hosmer is often considered the first professional female sculptor. In 1852, Hosmer travelled to Italy where she became a pupil of John Gibson, the welsh sculptor. Hosmer believed that the art of sculpture was superior to painting, writing that ‘painters must possess a greater variety of knowledge, as what they produce is more easily understood by the mass, because what they see on canvas is most frequently to be observed in nature. In high sculpture it is not so. A great thought must be embodied in a great manner, and such greatness is not to find its counterpart in everyday things.’

During her time in Rome, Hosmer enjoyed a wealth of access to classical works and enjoyed studying mythology and history. As such, her work evolved to include many mythological references and figures rendered in the classical style. Working predominately in marble, Hosmer’s large-scale works enjoyed commercial success and can be found in a range of cultural institutions across both Europe and the USA.

American sculptor, Anne Whitney, rose to prominence in the mid to late nineteenth century for her bust and full-length sculptures of America’s most revered political figures. Whitney is celebrated today for her liberal views, particularly those that supported both women’s rights and the abolition of Slavery. Whilst Whitney never married, she maintained a relationship with fellow artist, Abby Adeline Manning, for over forty years. Whitney died in 1915 at the age of ninety-three.

Amongst Whitney’s many works includes portraits of William Lloyd Garrison, the renowned nineteenth-century abolitionist and social reformer, Frances Willard, the American educator and reformer, and Harriet Martineau, the English social theorist and sociologist.

Born in 1850 in Philadelphia, the painter, designer, illustrator, and etcher, Jennie Brownscombe, became renowned for her genre paintings and works depicting American colonial history. In 1882, Brownscombe travelled to Paris where she received formal training in painting. Following her return to New York City, her work became increasingly sought after and she later went on to become a founding member of the Art Students League of New York.

‍The First Thanksgiving, painted in 1914, depicts the moment in which the Native Americans and the colonialists came together in 1621 to celebrate the success of the first harvest. Together with other paintings such as the Landing of Pilgrims, and the Tales of the Mayflower Children, these works demonstrate Brownscombe's distinctive style within the genres of American history and colonial paintings.

Born in 1862, Swedish artist Hilma af Klint is credited as the founder of western Abstract Art. Af Klint’s radical paintings and her contribution to Modern Art were often overshadowed by the work and reputation of later abstract artists.
Read More