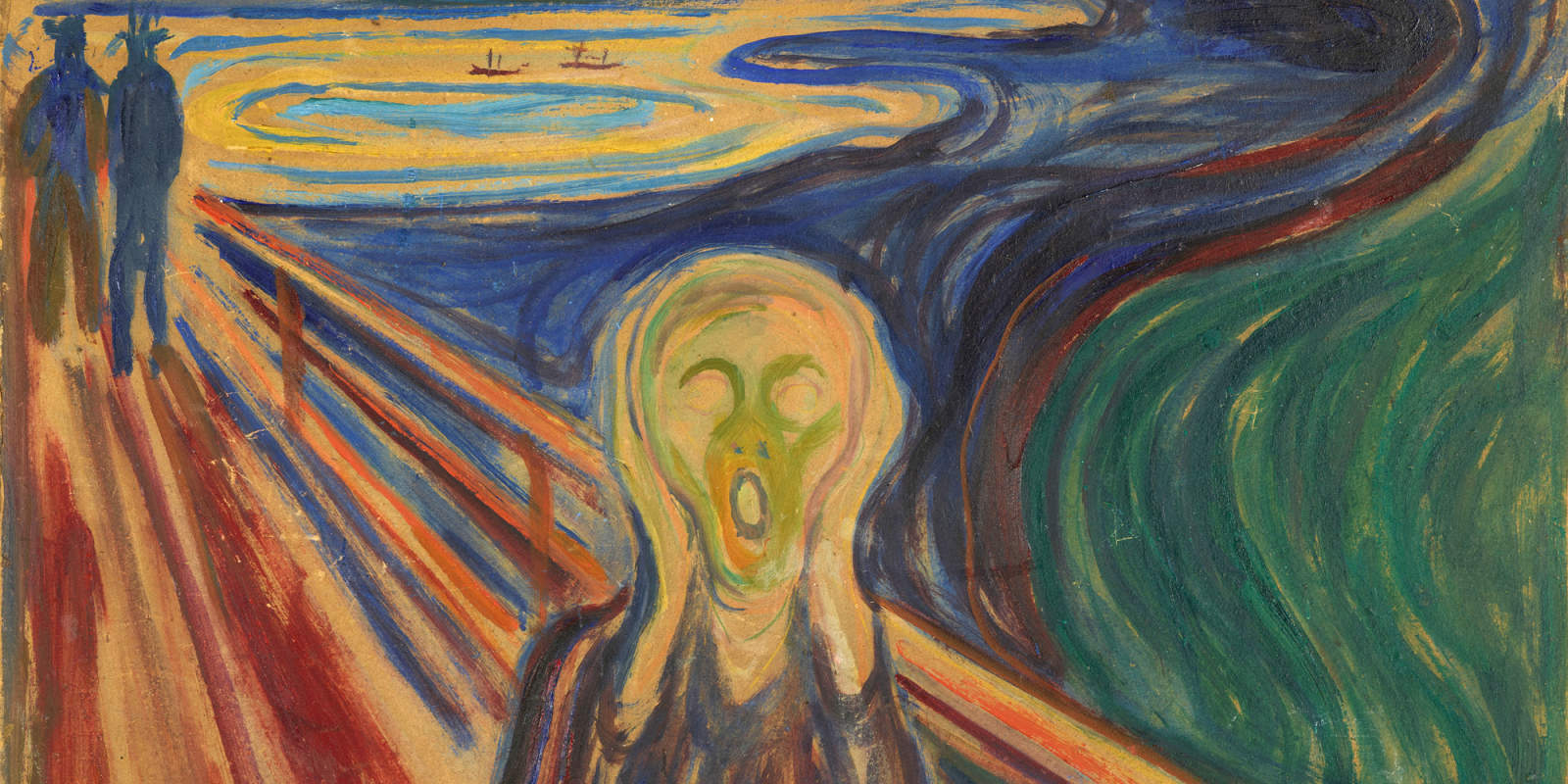 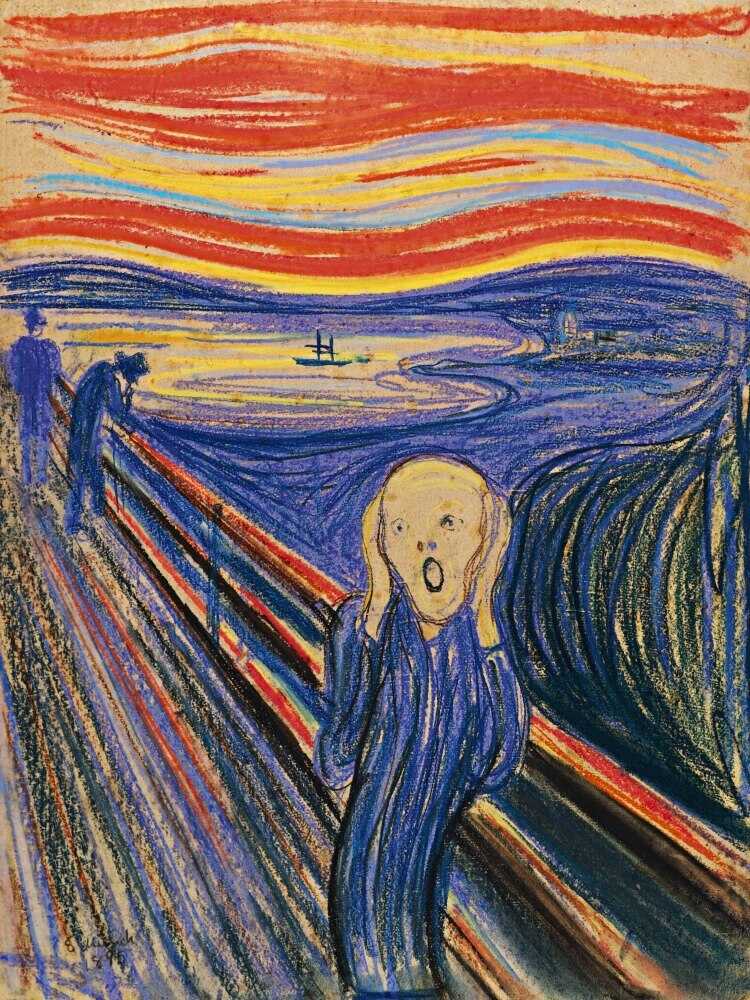 In 1893, Norwegian artist, Edvard Munch, created the composition for The Scream, a painting that would become one of the most identifiable paintings in the history of art. In each variation of the image, the figure is depicted standing on a wooden walkway at sunset, holding his head in his hands whilst screaming into the foreground. Abandoned by his two companions who walk off into the background, the figure stands at the centre of the image, positioned amid a vast fjord at sunset, surrounded by a blaze of red and orange.

Born in 1863 in the Løten municipality of Norway, Edvard Munch grew up in a religious family. Encouraged to pursue his artistic talents, Munch travelled to Paris in the 1880s, where he was inspired by the Impressionist works of Édouard Manet, and later, post-Impressionists such as Vincent Van Gogh and Paul Gauguin.

Throughout his life, Munch suffered bouts of depression, anxiety, and possibly schizophrenia, all of which had a poignant impact on his work. Records detail that mental illness ran in his family and likely affected his younger sister and his father, as well as other members of his family. Whilst many have debated whether The Scream resembles a self-portrait of the artist, the image is undeniably autobiographical. Munch’s inspiration for the painting came one afternoon when he was out walking at sunset. The artist recalled how the clouds became ‘blood red’, at which moment he felt an ‘infinite scream passing through nature.’

Munch created four versions of this work between 1983 and 1910. Two were made in paint and two in pastel. The first pastel version, completed in 1893, was likely created as a preliminary study to map out the composition of the image. The second pastel version, created in 1895, however, functions as a finished image, complete with intentional and confident curvilinear forms, a deep and layered palette of colour, and a ship that floats on the fjord in the background.

Of the two painted versions, the tempera, oil, and pastel painting from 1893, now in the National Gallery of Norway, has become the most internationally revered. Following its completion, the painting was exhibited in Kristiania, Oslo, where it was met with harsh criticism and speculation over Munch’s mental state. In 1904, it was discovered that Munch had inscribed ‘Kan kun være malet af en gal Mand’ (“could only have been painted by a madman”) on the edge of the work in pencil. Several theories have suggested that this inscription reflects a quote made by a critic and that Munch added it to the painting at a later date.

In 1994, the first version of the painting (created in 1893), now in the collection of the National Gallery of Norway, Oslo, was stolen in an art heist. On February 12, thieves broke into the gallery through a window and cut the wire securing the painting to the wall. They replaced the painting with a note that read ‘Thanks for the bad security’. The painting was recovered shortly after the incident, and the following year, four men were convicted and sentenced to prison. Ten years after the event, Munch’s last version of The Scream (1910), was also stolen from the Munch Museum in Oslo, along with The Madonna, another of the artist's paintings. The two works were recovered two years later by police, however, the details of their recovery are still unknown. When returned, the museum remarked that both paintings were in remarkably good condition, with only minor conservation treatments required.

The second pastel version of the painting, created in 1895, was bought for $119,922,600 by the financier, Leon Black in 2012. Together with his wife, Debra, Leon Black has amassed a multi-million-dollar art collection of Old Masters, Impressionist painting, Modern art and Contemporary art. Following the sale of the masterpiece, The Scream set the then-record for the most expensive painting ever sold at auction. Later that year, the pair then lent the work to the Museum of Modern Art where it remained on public display for six months. Currently, this painting is the only version of The Scream in a private collection.

Created by Pablo Picasso in 1907, Demoiselles d’Avignon represented a turning point for nineteenth-century art in both subject and style. The painting depicts five prostitutes in a brothel on Carrer d’Avinyó, Barcelona, who, rather than posing for the viewer appear to aggressively confront them.

Addressing a continuously widening gap in the art market, Artwide is the first digital platform for buyers and sellers functioning on an international level...

Non-fungible tokens, better known as NFTs, have dominated both art world headlines and markets for the best part of almost a year...
Read More