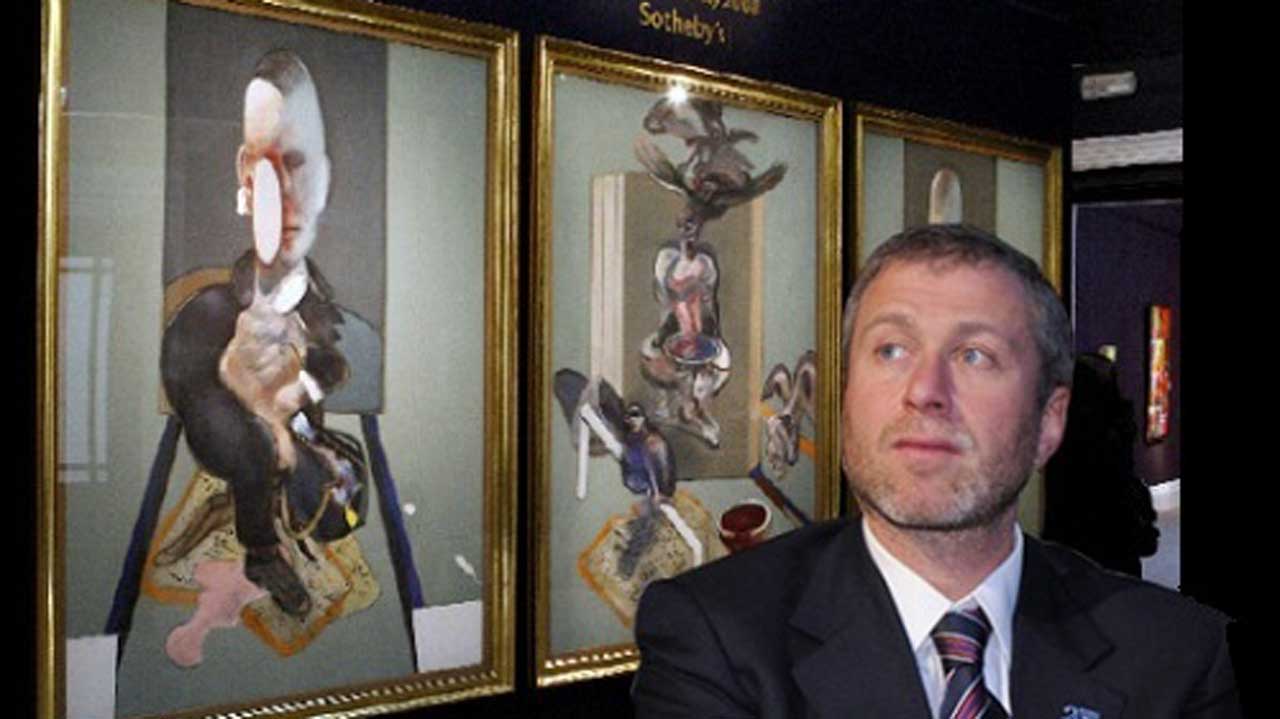 Russian Israeli businessman, Roman Abramovich, has often made headlines for his billionaire status and extravagant expenditure. Coming in at number 142 on the Forbes Rich List, Abramovich is the owner of the Chelsea football team, the second-largest yacht in the world, and a property portfolio worth more than £340m. In addition to these assets, Abramovich is also the owner of an extensive and important art collection. After his marriage to Darya Zhukova in 2008, the couple spent the following ten years assembling a diverse art portfolio before their separation in 2017.

Daughter of the Russian oil magnate, Alexander Zhukov, Zhukova was born in Russia but moved to the USA with her mother several years after her parents divorced. Zhukova has been credited as the driving force behind the creation of the couple’s collection. After establishing a career in the art world, Zhukova now sits on the boards of various arts institutions that include The Shed, The Metropolitan Museum of Art, and the Los Angeles County Museum of Art. In 2008, Zhukova and Abramovich founded Moscow’s Garage Museum of Contemporary Art, previously named the Garage Centre for Contemporary Culture. The Garage Museum provides various programmes for education, research, events, and publishing to represent both Russian and international cultures. In 2020, Zhukova remarried to another collector, Stavros Niarchos III, the grandson of Shipping tycoon Stavros Niarchos.

Zhukova and Abramovich’s other cultural philanthropy includes the regeneration of New Holland Island. Located 20 minutes from St Petersburg, this EUR400m project consists of a 19-acre island with office spaces, private housing, a cultural centre, and one of the city’s few public parks. The artificial island was built in the 18th century and over the past two centuries, has served a variety of purposes. The island was left abandoned after the fall of the USSR until Millhouse LLC, Abramovich’s asset management company, took ownership of the island in cooperation with the Iris Foundation, an initiative set up by Zhukova in 2008.

In 2008, Zhukova and Abramovich purchased Lucien Freud’s Benefits Supervisor Sleeping (1995). This painting, thought to be one of the couple’s first acquisitions, marked a world record auction price for the work of a living artist, selling at $33.641m. It is widely believed that the following day, Abramovich spent a further $86.281m on Francis Bacon’s Triptych (1976).

In 2013, Abramovich and Zhukova purchased a group of works by contemporary Russian artist, Ilya Kabakov. This series included around 40 paintings as well as various installations and albums that were purchased from the collection of John L. Stewart. Born in 1933, Kabakov’s long career is largely responsible for the diversity of this artist’s portfolio, which includes installations, theoretical texts, paintings, and drawings. Kabakov joined the Union of Soviet Artists in 1959, and throughout his life and career, bore witness to some of the Soviet Union’s most turbulent and revolutionary years. These political developments are often interlinked with Kabakov’s work, accessible in his recent range of installations that manifest as an exploration of Soviet visual culture. Emilia Kabakov, wife and collaborator of Ilya stated that the pieces brought by Zhukova and Abramovich were ‘the most outstanding in terms of quality and art historical significance’.

Created by Pablo Picasso in 1907, Demoiselles d’Avignon represented a turning point for nineteenth-century art in both subject and style. The painting depicts five prostitutes in a brothel on Carrer d’Avinyó, Barcelona, who, rather than posing for the viewer appear to aggressively confront them.

In 1893, Norwegian artist, Edvard Munch, created the composition for The Scream, a painting that would become one of the most identifiable paintings in the history of art. In each variation of the image, the figure is depicted standing on a wooden walkway at sunset, holding his head in his hands whilst screaming into the foreground.
Read More