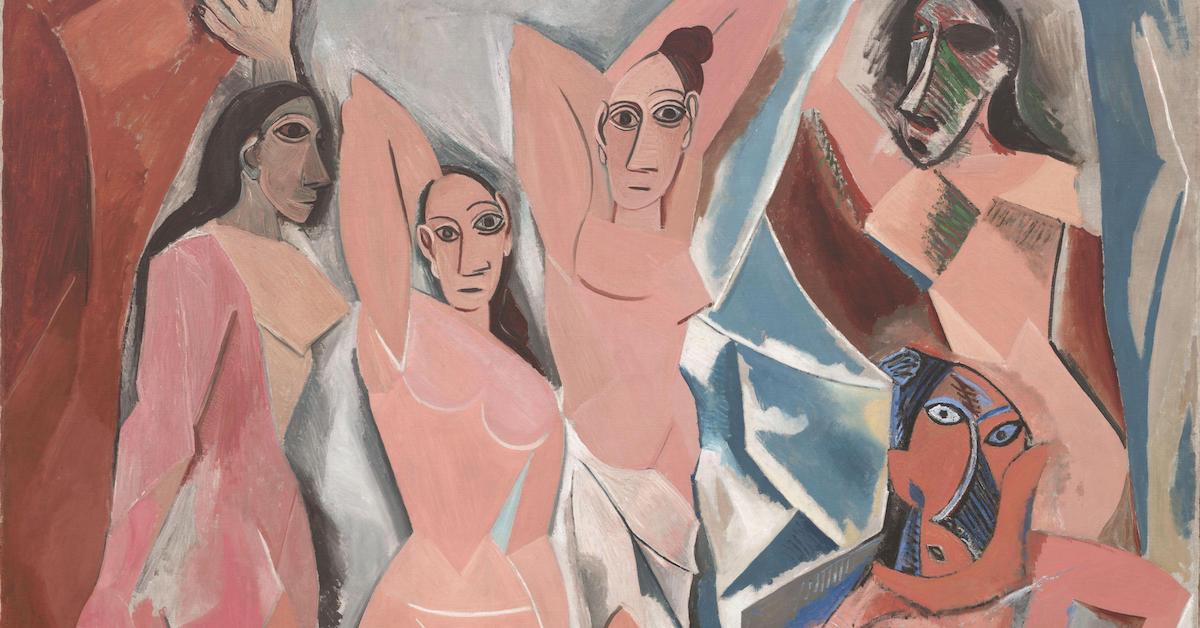 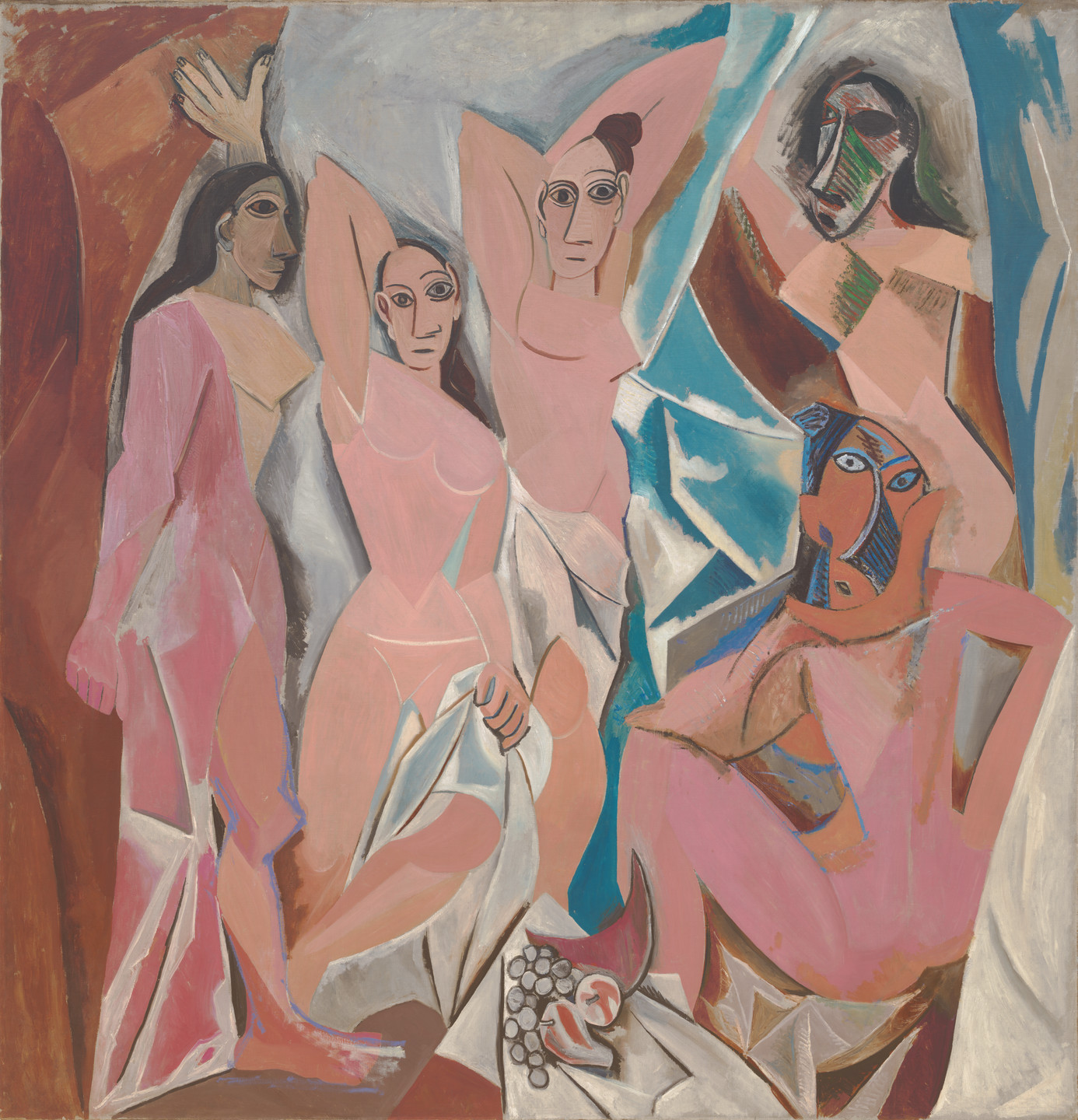 Created by Pablo Picasso in 1907, Demoiselles d’Avignon represented a turning point for nineteenth-century art in both subject and style. The painting depicts five prostitutes in a brothel on Carrer d’Avinyó, Barcelona, who, rather than posing for the viewer appear to aggressively confront them. Often seen as the starting point of the Cubist movement, Demoiselles d’Avignon was met with widespread controversy when it was first exhibited in 1916, where viewers deemed it immoral, vulgar, and primitive. Now one of the crowning jewels in the Museum of Modern Art’s permanent collection in New York City, the Demoiselles d’Avignon has found itself ranked amongst the most influential paintings of the nineteenth century.

Whilst the depiction of the female nude in art has been forever changing, when Picasso painted the Demoiselles d’Avignon, he consciously pushed back against the tide of artistic convention, portraying an uncomfortable and confrontational image that defied the social norms of the time. In addition to the presentation of this socially unacceptable subject, Picasso shocked audiences further by faceting and flattening each angle within the space in this new style that presented the figures as confrontational and overtly sexualised. Influenced by African masks and Iberian sculptures, Picasso used various ethnographic objects to inform the faces of the figures, particularly those on the right-hand side of the image, whose faces have become partially abstracted.

One of the most striking elements of the Demoiselles d’Avignon is the relationship that is quickly created between viewer and subject. The two central figures with the most human faces stare directly out of the picture frame, almost confrontationally, broaching questions about the relationship between them and the viewer. For the viewer, on the other hand, the painting broaches uncomfortable questions about their role in the scene, placing them in the position of someone who has stopped to stare from the other side of the brothel window.

Whilst taboo, nineteenth and twentieth-century society was fascinated by prostitutes and their relationship with sex, which, due to the ignorance and repression within society, propagated the idea that prostitutes were the reason for widespread social immorality. In light of the anxiety surrounding the prostitute and their ability to corrupt, it begs to question whether Picasso painted these women to celebrate their strength and power or to demarcate them as a danger to society, as their aggressive and animalistic appearance might suggest.

Painted decades earlier in 1863, Edouard Manet’s Olympia is amongst the key paintings that played a seminal influence in the creation of the Demoiselles d’Avignon. When Manet presented Olympia at the Salon in 1856, it too shocked audiences who commented on the brazen and confrontational stare of the figure. Alike the women in the Demoiselles d’Avignon, the figure in Olympia was also a prostitute. By including the image in the Salon, Manet also chose to challenge the taboo of prostitution amongst the French bourgeoisie. Olympia’s confrontational and direct stare makes the image particularly poignant, presenting a woman who, unashamed of her nudity and profession, seems to challenge the viewer rather than shy away from them.

Picasso painted Harem in 1906 at the height of his Rose Period, only a year before creating the Demoiselles d’Avignon. This oil and pencil painting, now in the Cleveland Museum of Art, depicts a group of women bathing in a Turkish Bath or a Harem. The figure combing her hair to the left is known to have been based on a group of sketches of Fernande Olivier, one of the artist’s lovers, who Picasso tenderly renders as demure and feminine, much like the other female figures in the scene. Through the figurative and compositional likeness alone, the influence of Harem on the Demoiselles d’Avignon is clear, however, by the time Picasso created this work, he had drastically departed from the soft, gentle portrayal of the figures in Harem.

Following its creation, the painting remained with Picasso until 1924 when he eventually sold the work to the designer Jacques Doucet for 25,000 francs. Whilst Picasso did not need to sell the painting, he did so as Doucet had promised that the work would be left to the Louvre in his will. After Doucet’s died in 1929, however, no stipulation was found in his will and the painting was sold to private dealers. In 1937, however, the painting reappeared in the exhibition, ‘twenty years of Picasso’, held at the Jacques Seligman & Co. gallery in New York City. Following the exhibition, the Museum of Modern Art purchased the painting for $24,000 where it remains on display today.

German by birth, Caspar David Friedrich is recognised today as one of the pioneers of Romantic Landscape painting in Germany. Friedrich’s enigmatic and contemplative landscapes feature gothic ruins, trees, religious iconography and misty settings, which, together, demonstrate his relationship with religion and push the boundaries of nineteenth-century landscape painting to new heights.
Read More