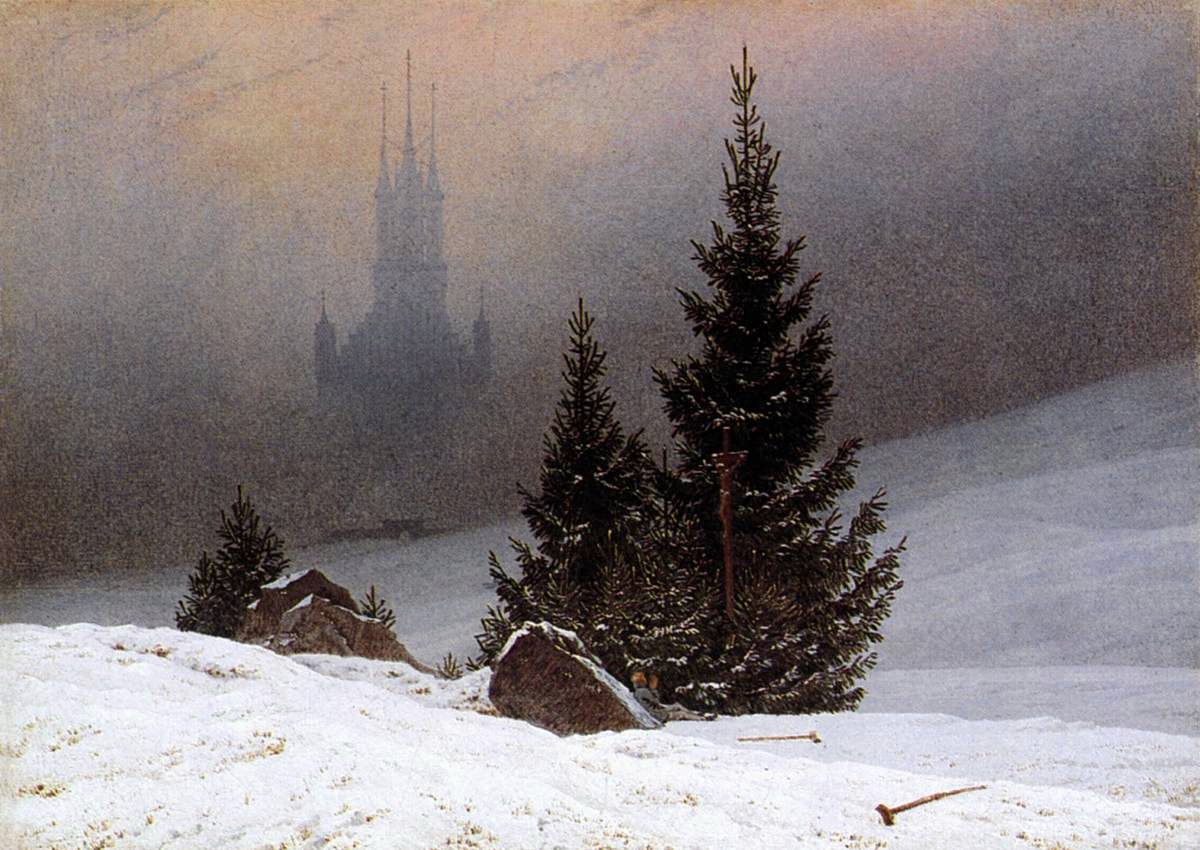 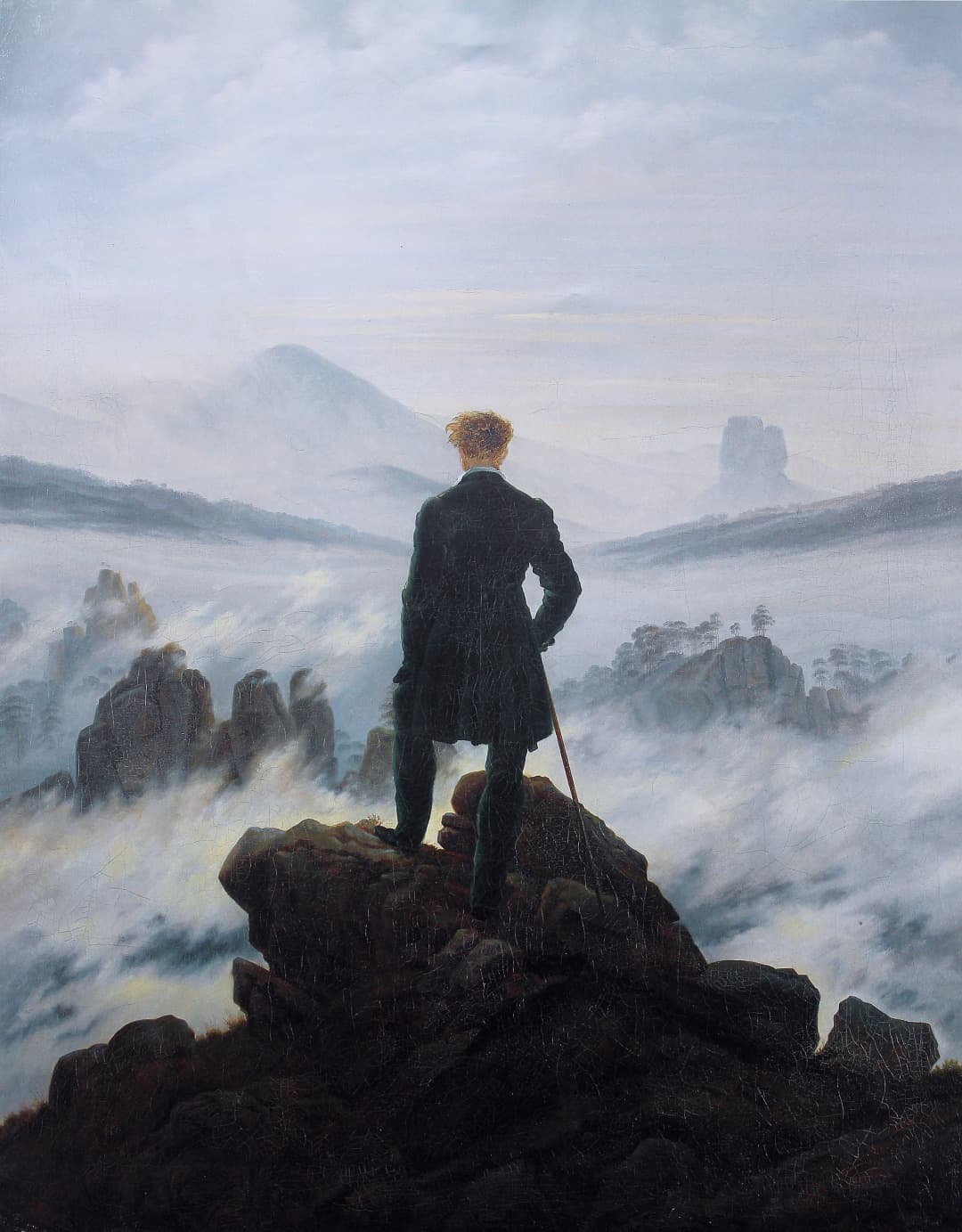 German by birth, Caspar David Friedrich is recognised today as one of the pioneers of Romantic Landscape painting in Germany. Friedrich’s enigmatic and contemplative landscapes feature gothic ruins, trees, religious iconography and misty settings, which, together, demonstrate his relationship with religion and push the boundaries of nineteenth-century landscape painting to new heights. During the movement of Romanticism, many artists viewed nature in conjunction with god, perceiving it as a metaphor for the sublime and a means of inspiring power, solace, awe, and self-discovery.

By using a constructed and technical approach, Friedrich’s landscapes are vast and powerful, placing his images within the realm of the fantastical. Friedrich was deeply influenced by geographical and geological development, otherwise known as geognosy, however, despite his prolific study of the German landscapes, Friedrich did not copy nature directly, but rather took inspiration from its vastness and its presence.

Friedrich’s painting, The Wonderer above the Sea of Fog depicts a sweeping landscape of mountains and hills, shrouded in a fog that obscures the viewer’s perspective of the landscape beneath. The centre of the image is punctuated by a figure who stands with his back to the viewer, positioned atop a rock, surveying the vast dynamic expanse of the misty landscape. The painting has often been associated with Edmund Burke’s theory of the sublime, which is defined as an effect or experience capable of instilling the strongest emotion that the mind can feel. It has been suggested that the figure in The Wonderer has been specifically positioned as such by Friedrich to differentiate between the viewer and the subliminal landscape, which is here employed as a conceptual surrogate for God.

Playing on the relationship between man, nature, and the sublime, The Monk by the Sea creates an atmospheric and brooding image of a holy man positioned within a dark and desolate seascape. The figure, thought by many to be Friedrich himself, stands near the shore of the sea where the distinction between sky, land and water is difficult to ascertain through the use of greys, browns and blues that are all close in tone. The monochromatic colour palette brings the image close to the boundaries of abstraction, likely in an attempt to reiterate the power of god through the turbulent and dramatic portrayal of the natural world.

Whilst Friedrich uses landscapes as a metaphor for a religious omnipresence, his landscapes that include ecclesiastic architecture and iconography create a more direct relationship between the religious and the fantastical. In Winter Landscape with Church Friedrich portrays a snow-covered landscape with fir trees, boulders and a crucifix in the middle ground, while in the background, the gothic spires of an imposing church can be made out through the snow. Two crutches in the foreground have been discarded by a man who sits against a boulder, looking up at the crucifix, suggesting that the Holy Spirit has healed the figure of his ailments.

In Friedrich’s The Cross in the Mountains, the viewer is presented with a much more severe, intense and imposing religious landscape. Painted in red, orange, brown and grey hues, the artist displays a looming gothic building in the background, softened by a series of fir trees on either side whilst a crucifix is positioned in the centre ground. Here, the symmetrical positioning of the trees appears to be almost part of the church architecture, whilst the imposing crucifix stands confrontationally in the middle of the image.

Friedrich’s departure from traditional religious imagery divided audiences, and in several cases, was met with criticism. Commenting on the Tetschen Altarpiece (1807-1808), a landscape portraying a crucifix atop a cross in the mountains that was envisaged for a private chapel in Tetschen, the art critic Friedrich Wilhelm Basil Ramdohr stated that it was ‘true presumption when landscape painting wants to slink into the church and creep on to the altars’. Today, however, Friedrich’s landscapes are celebrated for their unique approach to Romantic religious imagery and are revered by many as both religious and non-religious images.

Establish your taste This is the first and most important step in building your art collection. Your personal taste is unique to you and will invariably change and evolve over time, moving into new and possibly unexpected territories...