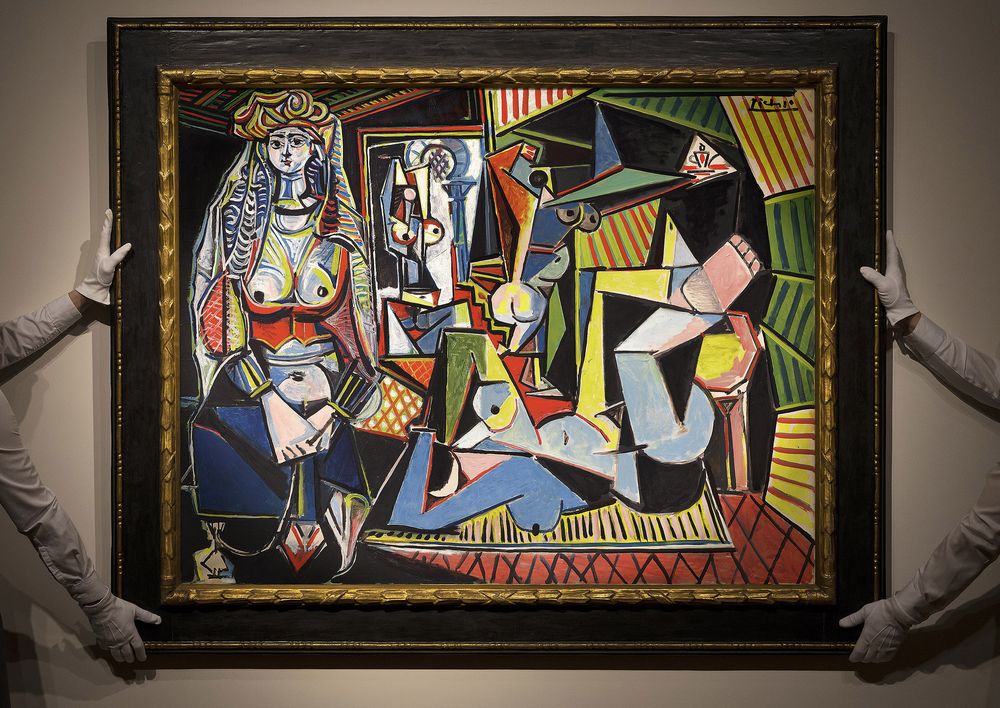 Italian by birth, Modigliani was born to a Jewish family in Livorno. In 1906 Modigliani moved to Paris, integrating himself into the artistic and avant-garde community of Montmartre. Modigliani led an impoverished existence in Paris and achieved little commercial success during his life. As his financial situation worsened, the artist became known to exchange his paintings for meals in restaurants.

Nu Couché was painted as part of a larger commission by Léopold Zborowski, a friend and patron of the artist for whom dozens of reclining nudes were created between 1916 and 1919. In 2015, Nu Couché sold for $170.4 million on the 9th of November.

Les Femmes d’Alger was part of a fifteen-painting series created by Picasso between 1954 and 1955 that also included almost 100 studies on paper. The series was heavily inspired by Eugène Delacroix’s Femmes d’Alger dans leur Appartement (1834) and is often thought to pay homage to Matisse’s odalisques.

The painting, otherwise known as Version O, was bought by Victor and Sally Ganz in 1956, a year after the series was completed for around $2 million in today’s value. The painting was sold as part of the Ganz collection in 1997 for $31.9 million, and again in 2015 for $179.4 million.

These two pendant portraits were painted for the wedding of Maerten Soolmans and Oopjen Coppit in 1634. The newly wedded couple are portrayed in rich black silk garments with lace trimmings that were typical of Dutch seventeenth-century elites. Throughout their long history, the portraits have never been separated.

In 2015, the pendant portraits were jointly purchased by the Louvre Museum and the Rijksmuseum for 160 EUR million, an unprecedented price for a painting by Rembrandt.

Mark Rothko has received consistent admiration for his ethereal and existentially charged canvases, securing his reputation as one of the greatest painters of the twentieth century. No.6 (Violet, Green and Red) is stylistically in keeping with Rothko’s other works from this period, manifesting in a dynamic and hazily rendered combination of colours.

Dmitry Rybolovlev purchased Wasserschlangen II for $170 million in 2015, one year after purchasing Rothko’s No.6 (Violet, Green and Red).

Number 17A was painted by Jackson Pollock at the peak of his fame in 1948. Renowned for his unique technique of ‘drip painting’, the artist would create his images by throwing or dripping paint onto a canvas laid on the floor below. In 1949, Number 17A was featured in Life Magazine, an editorial move that became largely responsible for boosting Pollock to new levels of fame.
In September 2015, hedge fund manager Kenneth C. Griffin purchased Number 17A for $200 million, ranking this painting at number five on the list.

Created by Paul Gauguin in 1892 during his first visit to Tahiti, Nafea Faa Ipoipo? (When Will You Marry) depicts two young Tahitian girls kneeling in the centre of a vibrantly coloured and partially abstracted landscape. Gauguin travelled to Tahiti in 1891 to create genuine ‘primitive’ art, rather than the inauthentic and inaccurate depictions of this genre that were produced by artists in Paris.

Since the colonisation of Tahiti in the 18th century, the island was almost fully Westernised by the time of Gauguin’s arrival. Over two-thirds of the indigenous population had been killed by Western diseases, which, coupled with the European presence, left few traces of their cultural presence by the late nineteenth century. Despite the various paintings of nude, native women that are in circulation today, these depictions are now viewed as untruthful, fabricated images, created for the appeal of the contemporary western audience.

In February 2015, Nafea Faa Ipoipo? (When Will You Marry?) was sold by the Staechelin family to The State of Qatar in a private sale for around $210 million.

Paul Cézanne’s The Card Players was painted between 1894 and 1895 during the last years of the artist’s life, otherwise known as his ‘final period’. Cézanne’s paintings during these years almost consistently depict images of peasants in the region of Provençe.

Painted by Dutch-American Abstract Expressionist, Willem de Kooning’s Interchange is the second most expensive painting on record. Created in 1955, Interchange marks a significant transition in the subject matter of de Kooning’s work, moving from paintings of women to abstracted landscapes.

Salvator Mundi, painted by Leonardo da Vinci c.1500 was sold on the 15th November 2017 for £450.3 million, coming in as the most expensive painting on public record. Translating as ‘Saviour of the World’ from Latin, Salvador Mundi portrays Christ with his right hand raised in blessing as his left hand holds a crystal orb.

After a heated auction, the buyer of the painting is believed to be Prince Badr bin Abdullah, the Saudi minister of culture.

In 1851, Ernest Gambart founded one of the first commercial galleries in London. Located at 120/121 Pall Mall, Gambart’s gallery dealt predominately in French painting and hosted its first exhibition in 1854, a tradition that would quickly become an annual event...
Read More